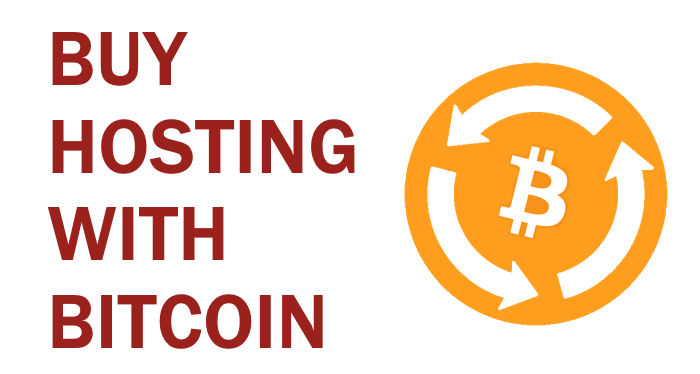 Where to Buy Hosting with Bitcoin?

So you’ve got hold of Bitcoin, or you’re planning to get some, and you would like to buy web hosting with it. Perfectly sensible. Bitcoin is by far my favorite way of paying for my online services and here’s why:

1) It’s anonymous.
2) There are no transaction fees.
3) It’s portable. You can carry your money on a USB stick.

If you already have experience with Bitcoin, I’m confident you would agree with me and probably have some reasons of your own as to why you use Bitcoin. If you’re new to this, then I’m sure the reasons of why I’m using Bitcoin were quite convincing.

Now in this list, we will be discussing regular hosts that accept Bitcoin payments. The criteria we have looked at is affordability, reputation, quality of service, and customer support. If you need any special type of hosting, like adult hosting, DMCA-ignore hosting, or bulletproof hosting, check out our other articles on this website. This list will have a mixed provision of niche services.

As a final note of this introduction, I highly recommend that you use Bitcoin’s base program called Bitcoin Core. You can download it from their official website at https://bitcoin.org/en/download. Any other Bitcoin wallet service is a business build on the base program, and it’s very likely that they take some fee for every transaction. If you want to be fully anonymous, I suggest that you install Bitcoin Core on a VPS with Linux or Windows Desktop Interface, which you’ve bought from an anonymous hosting provider.

Without further ado, best hosts to buy hosting with Bitcoin.

CRServers is operating from Costa Rica since 2004. Not many might not know this, but Costa Rica has a great Internet infrastructure; several fiber-optic submarine cables are connected to the country. In addition, it’s a great place to open a business since it can be done quickly, legally, and with little or no tax obligations.

Final remarks:
CRServers.com never grew in popularity. I assume it only attracts clients that are opening a business in the same country. Thus, if you wish to host in Costa Rica, this is the best option.

CleverPuffin is the most unpopular host in this list, by far. This is the reason why we have included them. For dynamic purposes, but also because their only payment option is Bitcoin. They began in 2012, and offer only web hosting. No VPS’s or dedicated servers.

Final remarks:
CleverPuffin is worth a try if you want to take a risk. It’s most likely a one-man host and the website isn’t very user friendly. If you’re just looking to scatter your many websites on Bitcoin hosts, then this is an option.

Gandi.net’s catchy slogan “no bullshit” encapsulates how they approach offering hosting to their clients. This includes honesty to their clients, admiting mistakes, and helping whenever they can. No wonder they’ve grown extremely popular since their launch in 1999. They’re predominantly known for selling domain names, but they also offer hosting, which you can pay with Bitcoin.

Final remarks:
As you can tell by their mentioned configuration, their web hosting is not very friendly to the beginner. For example, it excludes information like how much disk space you receive, or even what kind of control panel they have. They do, however, have one-click WordPress on their hosting plans. Regardless, Gandi.net is more for the experienced user.

Geekshosted.com was created in 2013 by two college students. Now that they’re at 16 full-time employees with servers in Singapore, Romania, Germany, France, Canada, and the United States. Like every other host, they guarantee 99,99% uptime, offer low prices, and care about their customers. Aside from hosting, they also offer web design, and SEO services.

Final remarks:
I wouldn’t believe their unlimited plans, since they rely on the assumption that your website won’t grow much in traffic, which it doesn’t for most people. But if you’re intending to build a website that will get a lot of traffic, I’d choose elsewhere.

MonsterMegs emerged in 2009 in Phoenix, Arizona. There are the typical hosting provider, but they only offer web hosting. They do not have any VPS’s or dedicated servers. These are their options:

Final remarks:
You can choose to host your shared hosting in Phoenix, Arizona or Amsterdam, Netherlands. Their prices are slightly overpriced, which explains why their hosting service never grew immensely in popularity. They are, without a doubt, worth considering.

If you’re familiar with the hosting industry, you have probably heard of OrangeWebsite. Established in 2009 on the Icelandic island, OrangeWebsite is much an offshore host as one can expect it to be. Iceland is famously known for safe harboring people and businesses when the rest of the world turns their heads to them. They like to publicly label themselves as a freedom of speech host. Let’s have a look at their web hosting plans:

Final remarks:
You can immediately tell that the prices are more expensive than that of regular hosts. After doing some research, I found out that the costs of running business are far more expensive than in Europe and the United States. In my opinion, OrangeWebsite’s prices are fair and they also have a great reputation online, so it’s definitely worth trying them out if you are looking to host on the iceland.

HosterBox is a regular host located in Ottawa, Canada that happens to accept Bitcoin. They’re a relatively popular host, but havent’ grown much in the last few years compared to their rapid growth since their launch in 2010. They pride themselves with 99.9% uptime, 24/7 monitoring and support, and large amounts of space and bandwidth at a low price.

Final remarks:
Good prices for great specs. Definitely worth trying out if you wish to be hosted in Canada. Also their reviews on the Internet are good. It appears they have a small staff, and a weak marketing team. This explains their mild popularity.

CCIHosting.com is a private and offshore host established in 2002. Located in Panama, which is known for its liberal views on nearly everything, it comes as no surprise that CCIHosting also accepts Bitcoin. They offer domains, web hosting, VPS’s, dedicated servers and even colocation if you wish to have your own server in Panama. The prices are, of course, higher than that of regular hosts.

Final remarks:
It’s very clear what exact specs you receive with CCIHosting, and they make sure they keep up with user-friendliness and any other modern aspects expected from hosts nowadays. CCIHosting.com is not the cheapest ofsfhore host out there, but it’s definitely a great option, especially if you’re looking ot host in Panama.

MightWeb.net is a young American-based host that started in January, 2015. Their team consist of a small group of several people. They offer services that any other large hosting provider offers as well; shared hosting, VPS (Linux and Windows), and dedicated servers. These are their web hosting packages:

Final remarks:
Their web hosting is located in Dallas, Texas and it’s a definite plus that they are using SSD drives instead of regular drives. Their affordable plans are good reason to try them out. Since they have launched not so long ago, it’s worth trying them out so that they can prove themselves.

AbeloHost is an offshore host located in central Europe that accepts Bitcoin. They’re very liberal in what they allow and they prioritize freedom of speech. They offer SSD shared hosting, SSD VPS, Storage VPS, dedicated servers, and offshore domains. They’re popularly known for their affordable prices:

Final remarks:
While their plan starts at approximately 4 dollars, you do get a lot of specs for it, like the 10 GB SSD and 512MB RAM. You can immediately host a few websites on it and start pulling in traffic. Another plus is that they do not offer any unlimited plans. They realistically state what they are able to offer without creating any unwanted surprises for their clients later on.

LibertyVPS.net is a Dutch-based offshore hosting provider that specializes in ofshore hosting, offshore linux VPS, and offshore windows VPS. Founded in 2013 from Amsterdam, they allow almost anything to be stored on their servers. They accept Bitcoin, OKPAY, Payeer, Perfect Money, and PayPal. These are their cheapest offshore hosting options:

Final remarks:
With all their offshore hosting plans, you also get LiteSpeed, CloudLinux, Fantastico Installer and FFMPEG support. LibertyVPS.net is a great option to host your websites because you know your right for freedom of speech will be protected.

This was a list about where to buy hosting with bitcoin.